Our history in Italy

It was the year 1953 when Fischer & Rechsteiner was established. On the 29 th of April of ……quite a long time ago, but not so far away at the eyes of the persons who were present at the time and who lived in first person those years. A period evanishing in a remote past and in a completely different time for the youngest ones. And actually 60 years are not a few! 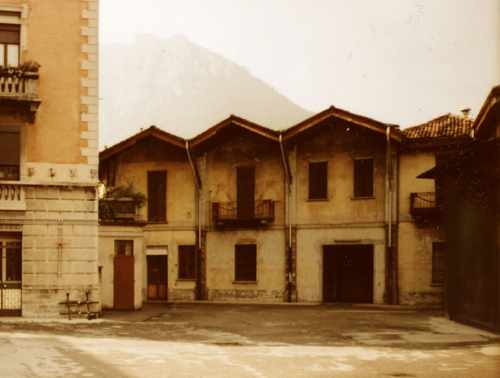 The main part of a person’s life passes and many things change. In these last years then the changes have come rapidly and numerous the ones after the others transforming our human society and our way of living as well as of working. Our towns were different at that time. So Lecco, too – the origin place of the company -was smaller, less populous, less chaotic, with not so many buildings, shops and roads, and surely with less traffic. All this made it possible and natural to locate a forwarding company – with the frequent use and passage of cars, trucks and vans – in a street which nowadays is almost in the centre: via Ghislanzoni. Here at the number 17 there was the first office of Fischer & Rechsteiner. At those times they were suburbs! To use temporarily the street to load/unload the trucks and for the monoeuvres was not a problem. Today it would be impossible: even one only of the tens of operations which are daily made would block the traffic in the area. Just think that this area is now the subject of one of the largest urban regeneration projects in the city, with the creation of the University Campus premises. At the beginning Fischer & Rechsteiner started its activity without employees, managed and leaded only by the two founder partners: Giancarlo Riva (born on 1929) and Aquilino Ripamonti (born on 1929) beside to Fischer & Rechsteiner SA of Chiasso/Switzerland. Then on 1957 the first person was employed, followed by a second one in 1958 and so on, till today when the company has 4 offices in Italy and a few sister companies abroad with about total 100 employees, of which about 50 in Italy. At those times the import traffics of steel products – coils, wire rods, metal plates, etc. – coming from the Northern Europe Countries and addressed to Lecco were huge. To those traffics, important for the first period of our new born company, others soon joined in addition.

The main goals were:

Both the above traffics were generated by the Lecco industries in great quantity. In this period there was not even a customs office in Lecco and the customs bill was a very wide paper in several copies handwritten with the carbon paper. Now days all this has changed: the customs bills are generated by the computer, sometimes the paper copies are not even requested any longer and for a few years they are not demanded for the goods being moved in the EU Countries, where all goods can circulate freely. Furthermore the companies with specific characteristics can customs clear the goods directly at their premises thank to the domiciled procedure and to the important AEO qualification (both these two procedures are included in Fischer & Rechsteiner enrolments). The enlargement of the company, the business growth, the changing of the city with its needs and its traffic have made obligatory the choice to move corporate headquarters in a more peripheral area. So at the end of November 1973 Fischer & Rechsteiner move at 46, Via Piedimonte in Valmadrera, a village in the outskirts of Lecco on the direction Lecco/Milano, an area which has become during the years a highly industrialized zone. 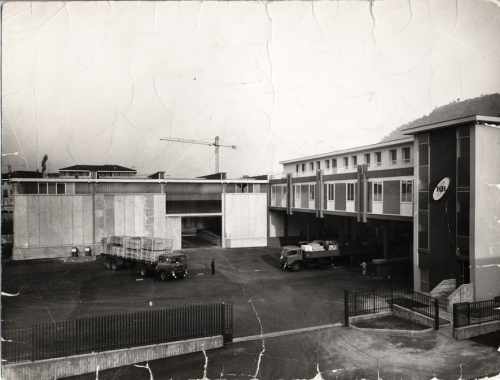 To overcome the limitation in range of the first overhead crane for handling containers weighing more than 16 tons, another facility was added to the initial sheds with crane capacity 30 tons –“Spider” model, which is essential for the normal handling of heavy containers. And so today the main terminal covers an area of more than 4.000 sq. mts. of which about 3.000 sq. mts. are used as warehouses with two cranes for 16 and 30 tons each. The loading and unloading operations of the numerous trailers and containers are made easier by the modern weight lifters.

The times when everything (or almost) was loaded bodily or by hand are far away! And, furthermore, how the way of working in the offices and the offices themselves have changed in 60 years! It seems not possible to think that only a few years ago the documents for national or international purposes had to be written all by the manual typewriting machines, we had to make copies with the carbon paper, to communicate only by phone (with quite many problems sometime to get the lines with the foreign Countries).

The times required and the duties of everyone were so different from now!

Then, little by little the first telex machines (old and bulky machines with the pre-punched bands, so difficult to be corrected and transmitted). Very different from the cellular phones, the electronic mail and internet! Not to speak about computers! The world is really smaller and everything is much nearer and easier to be reached. Not only in the ether, but also on roads, highways, railways, oceans and sky a lot has changed.

In the 60s the company has expanded its maritime groupage services, both in number and in the procedures, starting to handle exceptional shipping and great industrial plants transports. Nowadays the distances are shorter and the times reduced. But in the past it was not the same thing and to handle a certain kind of transports and shipments was really an exceptional matter. And Fischer & Rechsteiner along the years has handled many transports of big plants and machineries produced by the local main industries, some of which were exceptional transports demanding the use of real remarkable manpower and strategies.

It was the transport of pieces of enormous size that required exceptional conditions both for the road and for the ocean transport.

Exceptional means always needed on the road with regular traffic police escort and it was necessary the chartering of exclusive vessels with total capacity and size of the holds appropriate to the amount and characteristics of individual pieces to be loaded. When the destination port had no port harbor cranes for the landing of heavier pieces, large self-lifting ships were chartered (ie large floating barges carrying huge cranes) able to embark and disembark with their own means. Although the port of Genoa was the closest one to Lecco, almost all sailings were moved to other Italian ports such as Venice and Savona since the existing tunnels on the Milan/Genoa highway did not allow the passage of those transports.

In particular then, in the second half of the 60ies and during the 70ies the containers were introduced: big metal boxes which could be easily piled up and lifted by cranes and which could contain big quantities of different goods, protecting them and profiting of the space at the best, and with loading/unloading operations which were much easier than with single bulk cargoes. Cargo ships in the hold were largely replaced by the current “full container” vessels. All this completely changed the sea shipments, even if at the beginning there were quite a lot of “anomalies”.

A lot of people were sceptical towards these new and strange boxes, which actually turned out to be very useful. Furthermore the first containers had standard dimensions of 45′ that’s to say 13,50 mtl, TOO MANY for the length of that time of our trailers authorised only up to 12 mtl. So that every transport outside the port became “special” or “illegal”. Afterwards the ISO rules brought to the homologation for lengths of 6 mtl for the 20′ and of 12 mtl for the 40′ and then ECC permitted the homologation of the trailers for a length up to 13,60 mtl. Over the years, the company has set up some semi-trailers instrumental to the work of international freight forwarder, which had remained the real company core business.

They are, in particular, chassis necessary to provide a flexible service to local customers as well as special trailers (cabined, tarpaulined, high volume and specifically equipped for the hanging clothes) dedicated to Tunisia traffic, niche market where Fischer & Rechsteiner has been a leader since the late 80s . In recent years there have been many social and economic changes in our Country and in our area.

Fischer & Rechsteiner (who had meanwhile changed its company structure and its name and logo), to its initial specialization in the Mediterranean traffics, added further geographical areas and new ocean markets (Middle East, Far East, Latin America and Australasia) served also by airfreight, having obtained also the Iata Agent status in 1999. All this with very good results also thanks to an effective agents’ web, in some cases also with direct own quote-parts in these companies’ capitals. It is sure that our world is going towards an always larger worldwide internationalisation.

And for the international forwarders it is even more important to work with autonomy and safe means in the several part of the worlds. One of the most important aspects for a services company like Fischer & Rechsteiner is the quality standard of the offered services. To give its clients also this guarantee since 2001 FER has obtained the Quality Certification UNI EN ISO 9002 and in May 2003 obtained the passage to UNI EN ISO 9001.2000 (VISION 2000).

And now let’s go on, towards new challenges and new goals!